Continuing with the Japanese Noise segment. Solmania was a long active group that released many cassettes and CDs. Masonna is the name of the performer from Osaka who has been releasing his recordings since 1989 and is still active. Masonna also plays in Christine 23 Onna and has been involved in many other project and bands. Here are both bands captured live at the famous Bay Area Punk Rock venue. Both were recorded from the audience and have good sound quality. These are from the Master Tape. 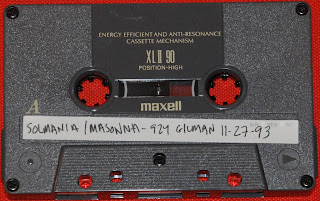