Bailter Space were from Christchurch New Zealand and had their start in 1980 under the name The Gordons. Over several line up changes The Gordons released two albums. One original member started a new band in 1986 that became Bailter Space and by 1989 the two other original members of The Gordons had joined. Between 1988 and 2013 Bailter Space released nine albums. On this show the band are mostly playing songs from their 2nd album. It's an audience recording and has good sound quality. [from cassette tape] 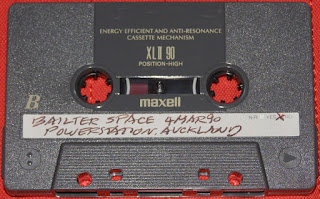