Stengte Dører were from Oslo Norway and formed in 1985. The guitarist and drummer were previously members of the band Svart Framtid and in the early 1990s formed a band named Behind Bars. The original line up released one split 7" ep in 1985. This show is an audience recording and the sound quality is muddy but still good. Can anyone fill in the song titles? 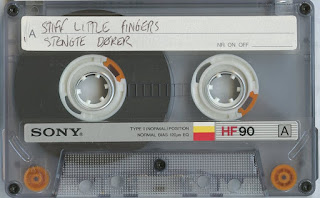