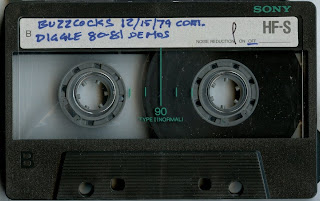 Here are some demo songs recorded by Steve Diggle in his home studio one month before the Buzzcocks split up in 1981. These songs feature guitar, drum machine and some vocals. None of the songs are finished and only the songs Drift Away and In The Back were ever re-recorded (with a line up of Diggle/Garvey/Maher) and released (on a Flag Of Convenience album). These recordings provide insight into the songwriting process and also gets one wondering what a fourth Buzzcocks album might have sounded like in 1981 had they continued at that time.