I posted this show a few years back from a different source. This is an upgrade in sound quality. This was the first appearence of the Idols in New York. The band was formed in London by Barry Jones and Steve Dior on Guitars and Vocals. The drummer was Jerry Nolan from Dolls and Heartbreakers and the bass player on this show is introduced as Simon. They played a few shows in London before relocating to New York City when Jerry Nolan's visa expired. At the end of the summer Arthur Kane joined the band on bass and they backed up Sid Vicious at his New York shows. In 1979 they released their only single. Jones and Dior moved back to London in 1979 and renamed the band London Cowboys. This is an audience recording. 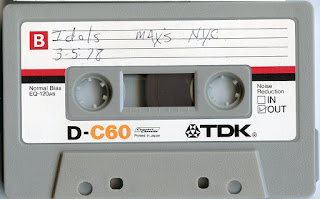