After all the Boston stuff it's time to move down to New York City.  Milk 'n' Cookies released one album in 1974 at the end of the Glam era and carried on until 1977. Singer/Guitarist Ian North , in 1977, became a part of the London Punk scene with his band Neo. There is no date written on this tape so not sure exactly when it is from. It's an audience recording and the sound quality is good. 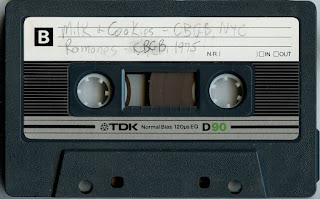