Unwarranted Trust were an all girls band from Ottawa Canada who are well known for having one song on the P.E.A.C.E. comp. album in 1984. These 4 songs seem to be the only ones they recorded in a studio. This version of Honour's Calling is the same one as on the P.E.A.C.E. comp. Two of these songs were released on the Matrax comp. tape which features all women bands. Track 1 here is one of those songs but listening to the comp. I couldn't determine the other song which is titled "Pay". The other song hasn't been released anywhere else as far as I could determine. Can anyone fill in the song titles? Sound quality is very good. 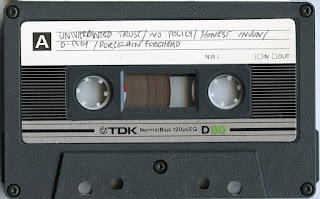