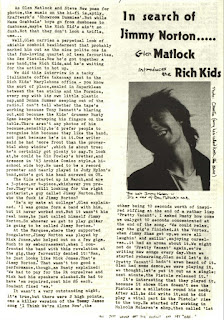 Today's post is another officially unreleased Peel session. This time from a sort of Punk Rock supergroup. The band featured Glen Matlock (Bass, Lead Vocals) fresh out of the Rich Kids and formerly of The Sex Pistols, Danny Kustow (Guitar, Backing Vocals) from Tom Robinson Band and Budgie (Drums) from Siouxsie & The Banshees and formerly of Spitfire Boys and Slits. Of these four songs Ambition and Just Like Lazarus were recorded by The Rich Kids in 1978 but remained unreleased until 1998 when they were released on the Burning Sounds CD, Ambition was also recorded by Iggy Pop when Glen played with him. This band changed their name in 1980 to Spectres and released two single, the first one featured a weaker version of Getting Away With Murder. Lost In A Landslide remains unreleased in any version. This is from a recent radio broadcast and the sound quality is excellent.