360's were a Grunge band from Boston that released three albums between 1991 and 1994. This live show is from a radio broadcast. Track 5 was officially released on the Pipeline! Live Boston Rock On W.M.B.R. 2xCD in 1996. There is a bit of static on the recording but it is still very good sound quality. Can anyone fill in the unknown song titles? 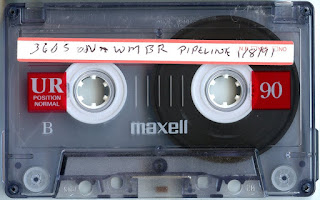