Sudden Impact were a short lived Hardcore Punk band from Philadelphia. They existed for less than a year,  only played a handful of shows (cool shows, though, opening for DRI and Negative Approach) and put out this tape. Bass player Beebe joined Homo Picnic in 1985 and recorded an album with them that was released in 1986. Sudden Impact used to have a Myspace page with photos and a live soundboard recording but that seems to have disappeared. Sound quality is excellent. 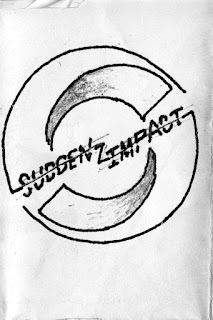